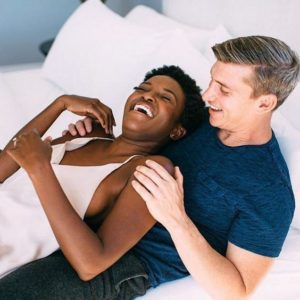 It’s no surprise that dating a white man comes with some mental hurdles for more than a few black women. You may worry whether he cares to understand your perspective as a black woman while still seeing you as a human being, same as him.

For those idealistic women who believe dating a white man is no different than dating a black man, you are truly ahead of your time.

For everyone else who can’t help but worry about whether a white man is really into you or has just watched Black Panther or Roots for the first time, this article may be of use.

Here’s a few  swirl dating tips  to know if he is conscious enough to take home.

Living in the U.S. is something everyone in this country is grateful for, but that doesn’t mean it’s perfect. If the subject of travel comes up in some form and you mention that you’d give up your American citizenship to live in another country, if you get any kind of response resembling shock, anger or being offended, he hasn’t bothered to pay attention to anything going on in society.

Leave him exactly where he is right now. Seriously… slowly back away.

A guy that’s worth your time doesn’t try to validate his worth by mentioning such unnecessary information. He’ll keep quiet instead and let you decide if he’s worth the headache that dating any man is sure to give you at some point.

Anybody in their right mind knows better than to ask such a ridiculously presumptuous question. A white man that assumes you have a homeland other than the one you just told them about knows this is an ignorant question.

The white guy you want accepts your answer as fact, understanding you are telling him what you realistically know about your origins.

Let’s be real, outside of slavery, Black history was not a part of his education, but now he’s infinitely interested about everything that makes you the melanin goddess you are – and is taking notes.

He doesn’t sweat the fact that he doesn’t know a lot and is brilliant and committed enough to seek knowledge on his own.

When he just doesn’t “get” why your blood boils over cultural appropriation, he uses the free internet to do some research of your culture or  black women white men dating tips instead of asking you or his token black friend to spend your time explaining it.

Now that’s someone you may want to marry!

You don’t want to give your time to just any fine ass white guy, but if you find one that does these things, you’ll know he’s worth building something with.